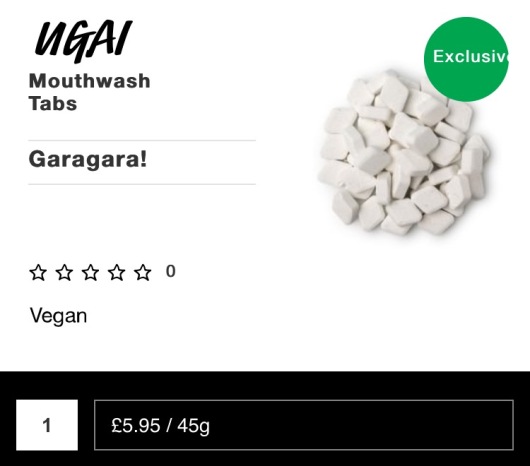 This Ugai is entirely too salty.  I believe there are folks who would like this but i can’t for the life of me figure out why to be honest.  The saltiness of the initial bite didn’t last the entire time while gargling and swishing.  The saltiness only stays the first 20 seconds or so.

An oasis of green tea and sea salt awaits. Inspired by the Japanese custom of gargling to maintain health and vitality, these little tabs are packed with tantalising herbal taste to deeply cleanse and comfort your mouth. Antibacterial tea tree and sea salt offer freshness, while green tea gives a quenching, verdant flavour.

After brushing your teeth, pop one tab into the mouth and take a sip of water to start the fizz. Nibble and swish before spitting out. They can also be used throughout the day whenever you fancy a bit or oral refreshment.

The use of a mouthwash should be the final step in the oral routine both in the morning and in the evening. It should not be used alone as a substitute for brushing or flossing. Avoid eating or drinking for half an hour after using the mouthwash for ultimate oral health.