I made a video describing this scent. The video is below, just go to 7:32 in the video for Confetti.

Emma’s initial workings were based on Rose, Violet, Coffee and Pear as a combination. Rowena smelt the perfume and thought it smelt of Sugar Almonds (a pastel coloured candy Almond – Usually found as a gift on the table at British Weddings). In Italy they have the same tradition for celebratory events and the Sugar Almonds are known as Confetti – which was a perfect fit …so much so, that this will be Emma’s signature scent for her wedding in 2020.

Olfactory description: The three stages of relationships are featured in this perfume. The innocent of violet leaf, like the beginnings of all relationships. The sensuality and deepness of love from the Roses and the comforting solidity of all marriages provided by the sandalwood oil. Sweet and floral.

What a surprise to get this in the mail. 😱

Only sold at the Lush Italy Perfume Library.

As i show in the video below, the wrap that this was wrapped in at the store is gorgeous. A beautiful burnished rose print and So silky.

This perfume was made in the Charity pot lotion scent, but at a very high concentration (it’s a strong perfume).

Geranium from Kenya, Rosewood Oil from Peru, Ylang Ylang oil from Ghana, and Vanilla from madagascar.

And the unique Scent Cube made with sustainable cork as a lid.

It’s got a slightly sweet chocolatey note, with a soft blanket of ylang ylang, and a lovely, slight woodiness.

And these CAN be delivered to the USA, because they’re not over 100ml each 👏🏼👏🏼

The perfumes are 15ml each.

This perfume smells so good when i first spray it on. The white flowers in it are sweet and frarant on my arm. It smells so fresh and gorgeous.

here’s a video where i review the new exclusive Lush ‘Perfume Library’ perfumes including Frangiapani. Go to 26:42 in the video for the Fragiapani perfume review and description.

Whereas i expected to love the more expensive fragrances of the bunch and it turned out i didn’t, i decided to buy Fresh As even though the ingredients didnt necessarily grab me. As irony woukd have it-Fresh As is my favorite of the five.

It smells as if Lush Needles & Pine shower jelly, Lush Guardian of the Forest , and Lush Princess Cottongrass perfume had a baby.

The fragrance of it is light and airy. It smells less like a forest and more like a meadow. Its not earthy its green and airy and gorgeous.

It smells just as beautiful when its wet as when it’s dry.

Welcome to the wilderness. With bracing fir needle absolute and hints of balsamic benzoin resinoid you’ll soon be feeling fresh as…

Revitalising fir and tagetes oils mingle in each vivid spritz to surround you with the bracing draw of nature. If any scent can embody the freshest of forests, snapping sticks underfoot and the warmth of a snugly scarf, then this is it.

For a limited time only, 30ml bottles of this perfume will be available to order online. This perfume and the rest of The Florence Collection are also available in 100ml bottles in your nearest perfume library. “ 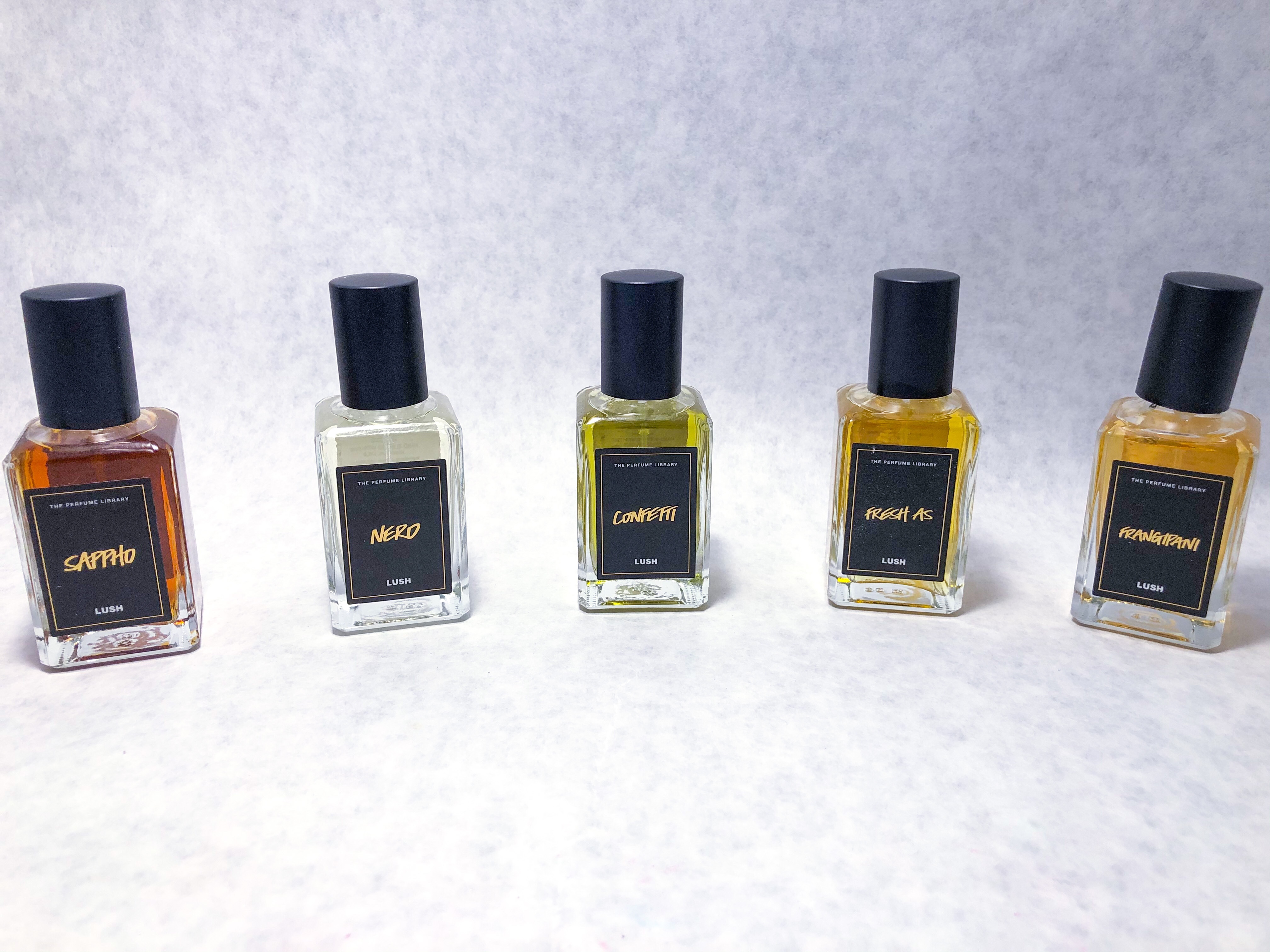 I bought five Italy perfume library store exclusives that were surprisingly on the Lush Uk site when i was looking for something else!

Here is a video reviewing and demoing them at length to help with your purchasing decisions. 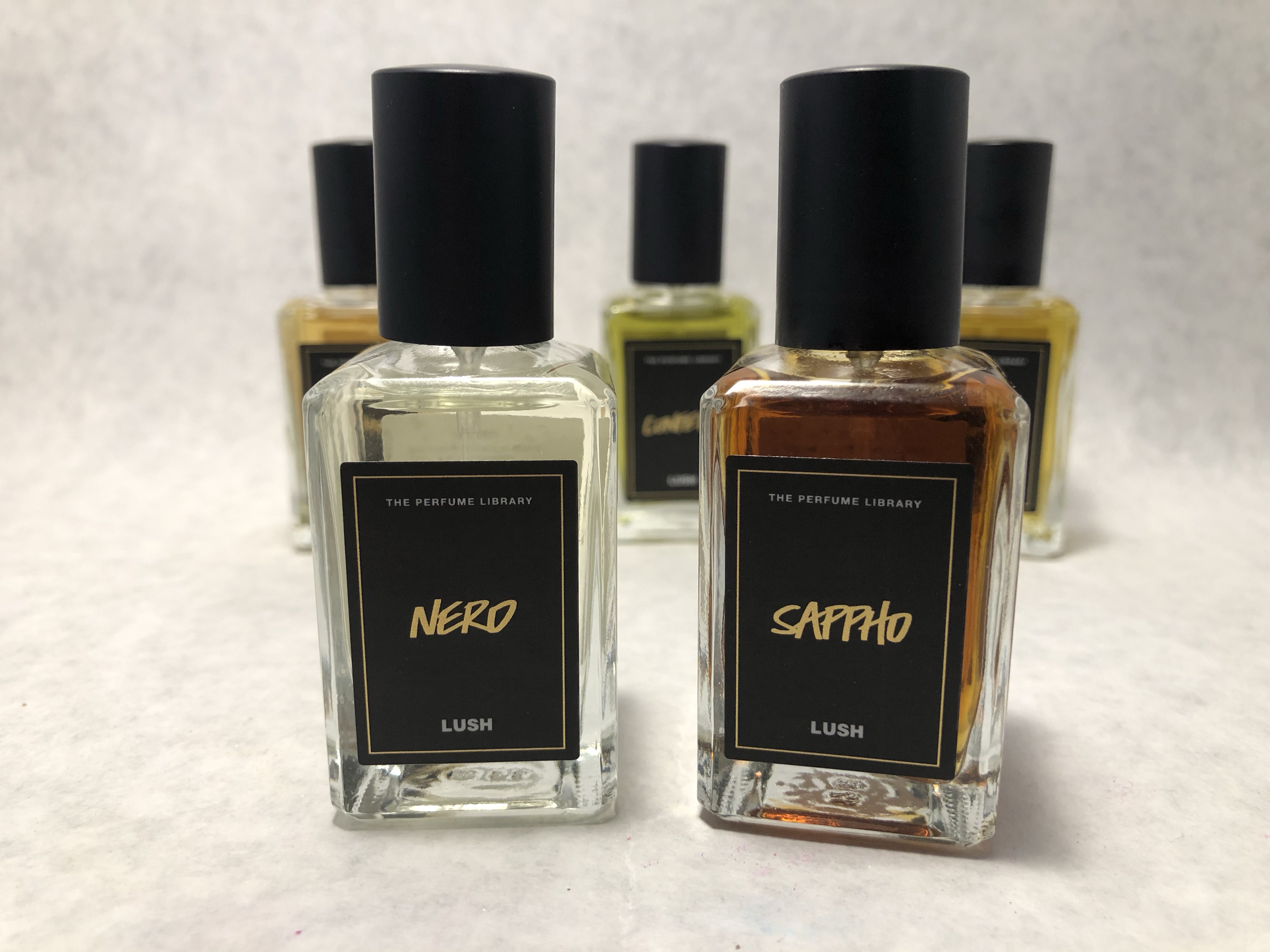 I should love them for all intents and purposes, according to the ingredients. And theyre the two most costly of the bunch. I just dont understand. 🤔 So im wearing them again today one on each arm, just to see if theres any change in my dislike of them. *Crosses my fingers*

I think Fresh As is the only one of the five that are truly impressive imo. And as far as the other four not onky do they not smell good compared to past lush gorilla perfumed, but a large part of the fragrance just disappears too fast (which is good if one doesnt like it i suppose) but gosh theyre like the opposite of the new lush body spray fragrances which seem to be more concentrated and last awhile on the skin, especially being almost half the price of a couple of these perfumes.

When smelling this fragrance, Mark immediately referenced Sappho, a prolific greek poet in the Archaic period (NOT a goddess!). She also ran her family’s shipping business whilst her brothers were away. Very little of her work survives from antiquity. For many people Sappho is the symbol of female homosexuality. She lived on the island of Lesbos and Plato describes Sappho as the 10th Muse.

Notes from the Nose: I knew for Florence I wanted to incorporate a heavy Orris/Iris base into a perfumes that represents the Florence Lily (the Iris Flower), the symbol of Florence …and this was it.

Olfactory description:  Sophisticated Orris hugged by the warmth of vanilla and tonka, sensuality of carnal jasmine and then brought into this century with a tobacco base.

Fresh As Fuck is basically the term for this perfume. There are a couple of references in the Urban Dictionary. To be Fresh As Fuck looking straight up fly.

The appearance of grass/flora on a sunny day following the succession of rainfall. This perfume represents the urban modern renaissance of our time.

Olfactory description:   Fresh and vibrant greens in the opening mirrors this vivid statement the perfume makes. Fresh As..is balanced by the earthy Orris and fruitiness of tagettes.  Serene like a stroll in a Renaissance floral garden.

Emma’s initial workings were based on Rose, Violet, Coffee and Pear as a combination. Rowena smelt the perfume and thought it smelt of Sugar Almonds (a pastel coloured candy Almond – Usually found as a gift on the table at British Weddings). In Italy they have the same tradition for celebratory events and the Sugar Almonds are known as Confetti – which was a perfect fit …so much so, that this will be Emma’s signature scent for her wedding in 2020.

Olfactory description: The three stages of relationships are featured in this perfume. The innocent of violet leaf, like the beginnings of all relationships. The sensuality and deepness of love from the Roses and the comforting solidity of all marriages provided by the sandalwood oil. Sweet and floral.

The sugared almonds at an Italian wedding tell a story in three acts. Young love, the innocence of violet leaf. A sensual rose blooms as the relationship deepens, until the final chapter reveals the lasting comfort of sandalwood oil. Created in 2019.

Frangipani is thought to refer to a fragrance made for perfuming the gloves of a Roman noble, the probably mythical Marquis of Frangipani. This perfume was ‘composed of every known spice’ and probably included a large amount of Orris root, musk and civet as these were standard perfumery ingredients at the time and Sweet Almond oil was used to soften and perfume gloves in the Renaissance. The Frangipani plant (Plumeria) was thought to resemble this fragrance.

Our perfume might smell familiar as it is similar to our solid hand serum –  Frangipani glove.

Olfactory description:  Creamy sandalwood and scrumptious almonds leans into the sweet frangipani and the perfume finishes off with a bright white floral and woody base. Starts sweet and finishes with a slightly smoky finish. Guaiacwood Oil in its raw form leans smokey (like cedarwood virginian)

The legacy (or myth) of the Marquis of Frangipani: a delicate dusting of sweet almond used to fragrance gloves. Across the ocean, a flower bearing a similar scent had not yet been discovered, but would eventually inherit the Frangipani name. Created in 2019.

Inspired by the origins of the name Neroli. The first is that the Emperor Nero inspired the term Neroli as he was a huge perfume and fragrant flower enthusiast. The information I read before creating the perfume was ‘The name Neroli is thought by some to originate from Anne Marie, Princess of Nerola, She used Neroli to perfume her gloves and her bath water and her popular gloves, called Guanti Di Neroli was the original name for this perfume.

Olfactory description:  A classic homage to the traditional citrus eau de cologne that dawned crisp male tailored suits. The petitgrain creates a woody depth to a light and airy citrus.

A classical portrait of the Princess of Nerola, her gloves delicately fragranced with the neroli that she’s thought to have named. Enter the Emperor Nero. Woody depths of petitgrain smoulder, and citrus notes of bergamot rise from the ashes, neglecting the burning city of Rome. Created in 2019.